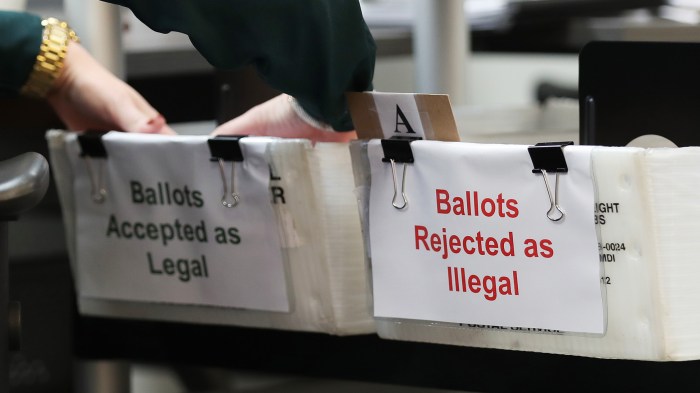 It was the nightmare scenario for the 2020 election: With so many more people than usual casting absentee ballots, observers feared that a significant share of ballots would be rejected for not following proper procedure. One study, for instance, showed that first-time mail voters, who are less familiar with the rules of absentee voting, were up to three times more likely to have their votes rejected, and at least 550,000 absentee ballots went uncounted during last spring and summer’s heavily vote-by-mail primary elections.

But those fears did not come to pass. According to data collected by FiveThirtyEight from state election offices, not only did absentee-ballot rejection rates not rise, but rejected ballots were actually less of a problem than they were in 2016.

From the 27 states, plus Washington, D.C., where we were able to obtain data, only 297,347 out of 47,999,299 absentee ballots cast in the 2020 general election were rejected — a rejection rate of 0.6 percent. And in 20 of the 23 jurisdictions that provided data for the last two presidential elections, the 2020 rejection rate was lower than 2016’s. (Data is not yet available in the remaining states but will eventually be released as part of the 2020 Election Administration and Voting Survey.)

For many states, the number of rejected absentee ballots turned out to be an incredible success story. Massachusetts, for example, cut its rejection rate from a mediocre 3.3 percent in 2016 to an excellent 0.6 percent in 2020 (for reference, states historically have had rejection rates of up to 6 percent). Maryland rejected about the same number of absentee ballots in 2020 (3,669) as it did in 2016 (3,672) — despite nine times as many total absentee ballots being cast (1,528,327 vs. 177,350). Four other states<a class="espn-footnote-link" data-footnote-id="1" href="https://fivethirtyeight.com/features/why-so-few-absentee-ballots-were-rejected-in-2020/#fn-1" data-footnote-content="

“>1 also rejected fewer ballots in absolute terms in 2020 than they did in 2016, despite a sizable increase in the total number of absentee ballots cast.

What’s behind this remarkable success? Election-administration experts cite several factors, but a big one was that voters submitted their absentee ballots early. That’s important because, in a normal election, the number-one reason that absentee ballots are not counted is that they arrive too late. But in 2020, several states reported steep dropoffs in the share of absentees received after the deadline. For instance, in Delaware, the share of absentee ballots that arrived late decreased from 1.3 percent in 2016 to 0.2 percent in 2020. In Maryland, it decreased from 1.3 percent to 0.1 percent. In Massachusetts, it decreased from 1.7 percent to 0.04 percent. According to the data for all three states (plus Minnesota, Oklahoma, South Carolina and Vermont), this dropoff in late ballots accounted for a majority of their overall reduction in rejected ballots.

One reason for this is obvious: Voters heeded election officials’ exhortations to send back their absentee ballots as early as possible. Ubiquitous reminders in the media and saturation coverage of problems at the U.S. Postal Service likely helped, too. But states by and large also proactively changed their election policies to prevent ballots from getting tossed due to lateness. Several states extended their deadlines so that ballots could arrive after Election Day (as long as they were properly postmarked), including Massachusetts. Michelle Tassinari, the director of the commonwealth’s Elections Division, told FiveThirtyEight that this was a big reason for the Bay State’s improvement.

Tammy Patrick, a senior adviser with the Democracy Fund, also applauded states for giving voters ways to return their ballots other than mailing them back (which, of course, can take several days). “Those return options made the difference in many ballots not coming back late.” Indeed, according to preliminary findings from the Survey of the Performance of American Elections, 45 percent of mail ballots were dropped off in person in 2020, up from 29 percent in 2016. In large part, this was because of increased access to ballot drop boxes. At least 38 states plus Washington, D.C., offered drop boxes in the 2020 general election, up from about 13 that did so before 2020. According to Tassinari, this was another secret to Massachusetts’s success. “We encouraged every city and town to get drop boxes, and some municipalities even had multiple drop boxes,” she said. “For instance, the City of Worcester had them in all the fire stations.”

Some states also implemented reforms to speed up the USPS’s ability to process ballots. “More states used intelligent mail bar codes [on their ballot envelopes] that allowed the postal service to know where ballots were and make sure they were processed in a timely manner,” explained Patrick. Massachusetts was one of those states: Election officials applied for 351 separate postal permits for special envelopes with bar codes pre-addressed to the 351 city and town clerks across the commonwealth — “a difficult, exhausting process,” Tassinari told us, but one that was worth it in the end. Instead of having to be hand-stamped, Tassinari explained, the envelopes could be processed automatically, leading to faster delivery.

Ballot lateness wasn’t the only problem that got better in 2020. Some states also cut into the second-most common reason absentee ballots tend to get rejected: voter error, such as a missing or invalid signature on the ballot envelope. For example, 15 states plus Washington, D.C., began offering voters the ability to “cure,” or fix mistakes on, their absentee ballots, according to Amber McReynolds and Grace Beyer of the National Vote at Home Institute. (That’s on top of the 17 states that already allowed ballot-curing before 2020.) State data suggests that this prevented thousands of ballots from being rejected. In Kentucky, which temporarily changed its election laws last year to allow ballot curing, 2,933 ballots were cured, leaving only 1,197 that were rejected. In Georgia, a state that had a cure process previously, 2,777 ballots were cured, cutting the number of ballots that were eventually rejected to 7,604.

McReynolds emphasized, however, that it wasn’t just that states changed their policies; technical advancements made a big difference as well. “Going into 2020, only one state had a full statewide ballot-tracking system that would notify voters of an issue right away. Now there are six,” she said. “And a lot of other states didn’t adopt full tracking systems but did put the information on their website so voters could look it up.” Some of these systems were incredibly quick and easy for voters, such as Colorado’s TXT2Cure program, which sent voters of discrepant ballots a text message with a link where they could upload a photo of their ID and sign a voter affidavit, right on their smartphone.

In addition, both McReynolds and Patrick praised organizations such as the Center for Civic Design for working with states to design more user-friendly ballots and envelopes. “Things like plain-language voter instructions, an ‘X’ in the signature box so voters know where to sign — something as simple as that little ‘X’ drives down the rejection rate,” Patrick explained. According to Whitney Quesenbery, the CCD’s executive director, 18 states plus Washington, D.C., adopted its designs or instructions last year, either statewide or in select counties. One of them was North Carolina, whose dramatically more legible ballot envelope may have had a tangible impact. According to preliminary data from the state board of elections, the share of absentee ballots tossed for incomplete witness information<a class="espn-footnote-link" data-footnote-id="2" href="https://fivethirtyeight.com/features/why-so-few-absentee-ballots-were-rejected-in-2020/#fn-2" data-footnote-content="

In North Carolina, you must fill out your absentee ballot in front of a witness, who must then print his or her name and address on the envelope and sign it as well.

Quesenbery herself, though, downplayed the CCD’s role in decreasing rejection rates, giving more credit to voter-education campaigns. “When the whole naked-ballot story broke in Pennsylvania, the [Pennsylvania] Department of State was on it. We helped them make posters that they mailed to every county election office,” she said, adding that they also helped voting-rights activists spread the word via posters and social media. Similarly, Patrick suggested that public-service journalism in the media, showing voters exactly how to cast their absentee ballots, helped many first-time mail voters avoid its potential pitfalls. But ultimately, the people I spoke with reminded me again and again that the low rejection rate was a testament to the voters themselves. “It was such an important election that I think voters took those messages to heart and took extra care to follow the directions,” Tassinari said. Quesenbery agreed: “I think people spent a lot of time thinking about how to make sure their vote counted.”

The verdict won’t be final until we get data for all 50 states, but at this point, it does seem as if most states were very successful at lowering their absentee-ballot rejection rates in 2020 — and it’s important that we take note of how they did it. Last fall’s efforts to keep rejection rates low weren’t undertaken automatically; they were born out of experience, good and bad. “Red flags and alarm whistles were going off after the primaries last year,” Patrick noted, galvanizing many states to fix the policies and systems that had led to so many uncounted ballots. And much of Massachusetts’s success was based on the best practices of other, more experienced states: “We were in touch with other states that primarily do vote-by-mail, like Washington, Oregon and Colorado. They offered helpful hints,” said Tassinari.

Now, it will be up to states to take what they learned from 2020 to keep rejection rates as low as possible in future elections.