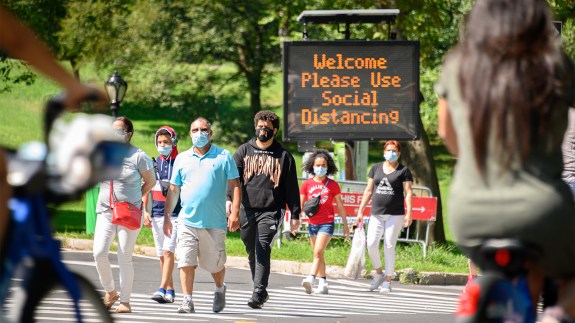 It has been hard to measure the effects of the novel coronavirus. Not only is COVID-19 far-reaching — it’s touched nearly every corner of the globe at this point — but its toll on society has also been devastating. It is responsible for the deaths of over 905,000 people around the world, and more than 190,000 people in the United States alone. The associated economic fallout has been crippling. In the U.S., more people lost their jobs in the first three months of the pandemic than in the first two years of the Great Recession. Yes, there are some signs the economy might be recovering, but the truth is, we’re just beginning to understand the pandemic’s full impact, and we don’t yet know what the virus has in store for us.

This is all complicated by the fact that we’re still figuring out how best to combat the pandemic. Without a vaccine readily available, it has been challenging to get people to engage in enough of the behaviors that can help slow the virus. Some policy makers have turned to social and behavioral scientists for guidance, which is encouraging because this doesn’t always happen. We’ve seen many universities ignore the warnings of behavioral scientists and reopen their campuses, only to have to quickly shut them back down.

But this has also meant that there are a lot of new studies to wade through. In the field of psychology alone, between Feb. 10 and Aug. 30, 541 papers about COVID-19 were uploaded to the field’s primary preprint server, PsyArXiv. With so much research to wade through, it’s hard to know what to trust — and I say that as someone who makes a living researching what types of interventions motivate people to change their behaviors.

As I tell my students, if you want to use behavioral science research to address real-world problems, you have to look very closely at the details. Often, a simple question like, “What research should policy makers and practitioners use to help combat the pandemic?” is surprisingly difficult to answer.

Take, for example, the fact that social scientists tend to study people from richer countries that are generally highly educated, industrialized, democratic and in the Western hemisphere. And some social scientific fields (e.g., psychology) focus overwhelmingly on whiter, wealthier and more highly educated groups of people within those nations.

This is a major issue in the social sciences and something that researchers have been talking about for decades. But it’s important to mention now, too, as Black and brown people have been disproportionately affected by the coronavirus — they are dying at much higher rates than white people and working more of the lower-paying “essential” jobs that expose them to greater risks. Here you can start to see very real research limitations creep in: The people whose lives have been most adversely affected by the virus have largely been excluded from the studies that are supposed to help them. When samples and the methods used are not representative of the real world, it becomes very difficult to reach accurate and actionable conclusions.

Additionally, the things we have participants do, or report that they are going to do in the laboratory, do not always map onto how they behave in real life. Take, for example, wearing face masks — something many Americans are still not doing. Convincing people to wear masks sounds like it should be easy to fix, but understanding why they’re not wearing masks in the first place is pretty complicated. It might be a risk perception problem (they don’t perceive COVID-19 to be that risky, or they underestimate their likelihood of getting infected). Or maybe it’s a perceived efficacy problem (they don’t think wearing the masks will actually reduce their risk). Or maybe it’s even a norm perception problem (they don’t think anyone else is wearing masks).

Understanding why people are choosing not to wear masks is important because if the goal is to design a successful intervention to change this behavior, we then as social scientists must first figure out which of these reasons — or more likely, which combination of them — is the root of the problem. Until we know what is driving much of the behavior we see, we cannot generate effective solutions for changing that behavior. And all this doesn’t even take into account that we now live in a world where everything — including the pandemic — is politicized, which also affects whether people are willing to pay attention to the messages in an intervention.

Research on other infectious diseases has shown that who is doing the intervening (i.e., who is delivering the message) matters, as experts are often more effective than non-experts. Studies have also shown it helps if the person doing the intervention shares characteristics, such as gender or race, with the people for whom the messaging is targeted. Additionally giving people laundry lists of things they can’t do is less helpful than providing them with a reasonable number (e.g., two to three) of things they can do.

Lastly, researchers need to address the seemingly cold and calculating question of whether an intervention is cost-effective. Resources are limited — especially in a situation like a pandemic — so social scientists are also trying to factor in which interventions are likely to have the biggest societal effect. To do that, we have to look at things like “effect sizes” of previous studies and translate them into pandemic-relevant metrics.

For instance, if we developed a message to increase mask-wearing and persuaded policymakers to buy air time in all 210 U.S. media markets, how much of an increase in mask-wearing should we expect? One percent? Five percent? The answer to that matters a great deal, because we have to decide whether that is a better or worse use of (limited) resources than investing in other strategies, such as more COVID-19 tests — something the U.S. also doesn’t have enough of.

Ultimately, figuring these things out often takes time, and it’s important for scientists and policymakers to acknowledge that. We need to say what we don’t know and when we need more time. After all, there’s a risk of acting too quickly, before we actually understand the problem or the effects an intervention might have. Being overconfident and wrong can come with very real costs: We in the scientific community lose future credibility and trustworthiness (not to mention the costs associated with any harm done between the initial flawed intervention and the eventual correct one). Think about the early messaging around face masks, which was fairly opaque. As some countries mandated masks, figures like the U.S. surgeon general tweeted that masks are “NOT effective.” Of course, scientists and policymakers later had to backtrack when studies showed that wearing masks is effective for reducing transmission of COVID-19.

And that brings me to one last thing I want to discuss: the ethics of scientific research. Data can be instructive, but it does not speak for itself. Behind every data point is a person. And with something like the coronavirus, where people are so deeply affected, we have to think about the ethics of intervening in people’s lives. Those ethics again involve considering things like who is represented in, versus missing from, the data we use and whose lives will be affected by those decisions.

Extreme levels of inequality in the U.S. and around the world have created power imbalances that often result in uneven distribution of the risks and benefits of interventions. Some groups are subject to disproportionate risks so that other groups reap disproportionate benefits. As a result, policy decisions often have winners and losers, and in both historical and modern society — including the COVID-19 era — the people who lose are usually those already on the margins of society. We have to remember that, and be vigilant in our efforts so that we do not reproduce these patterns.

I was reminded of this when I read a FiveThirtyEight article on changes in public opinion about reopening the economy. The article noted that between March and June, polling data showed a 22 percent increase in the share of Americans who said the government should allow businesses to open back up, even if it meant putting some people at risk. On its surface, that looks like a large increase in support for reopening the economy, and thus reopening might seem supported by the public. But looking closer, it becomes clear why it may be unwise to act on that evidence on its own: The observed trend was largely among white Americans. Eighty-two percent of Black Americans still thought that public health should be prioritized over the economy — roughly unchanged from March. White Americans had changed their minds: 49 percent thought the government should reopen the economy, even if it means putting some people at risk, compared with 24 percent in March.

This is an important reminder that the pandemic has not been the “great equalizer,” as it was initially described. The racial disparities in the pandemic have been so stark that early estimates suggest that about one in 2,000 of the entire Black population in the U.S. has died from COVID-19. It is therefore imperative we consider these different experiences of the coronavirus when considering what research we should use when responding to the pandemic.

Who is included in the data we’re using? And who isn’t? If we heavily weigh the opinions and other data gathered from one group as we design interventions, what happens to other groups? These real-world differences matter, and matter greatly. We have to ask ourselves those questions as scientists and remember that — especially in times like the pandemic era we’re living in — we’re betting people’s lives on the answers to those questions.