On Monday, New Jersey Sen. Cory Booker dropped out of the presidential race. And for a candidate who has long been pegged as a presidential aspirant, even while he was still mayor of Newark, it’s remarkable how little impact Booker’s candidacy made on the Democratic primary.

Booker never really had a “moment” in the race. He was polling at 2 percent nationally on the day he dropped out, and as you can see in the chart below, there were only a few polls where he did better than 4 percent. In fact, after the first debate in late June, he didn’t surpass 4 percent in a single national survey, and he continued to lose steam, failing to qualify for the December and January debates, and he wasn’t really in contention in any of the early states at this point either. 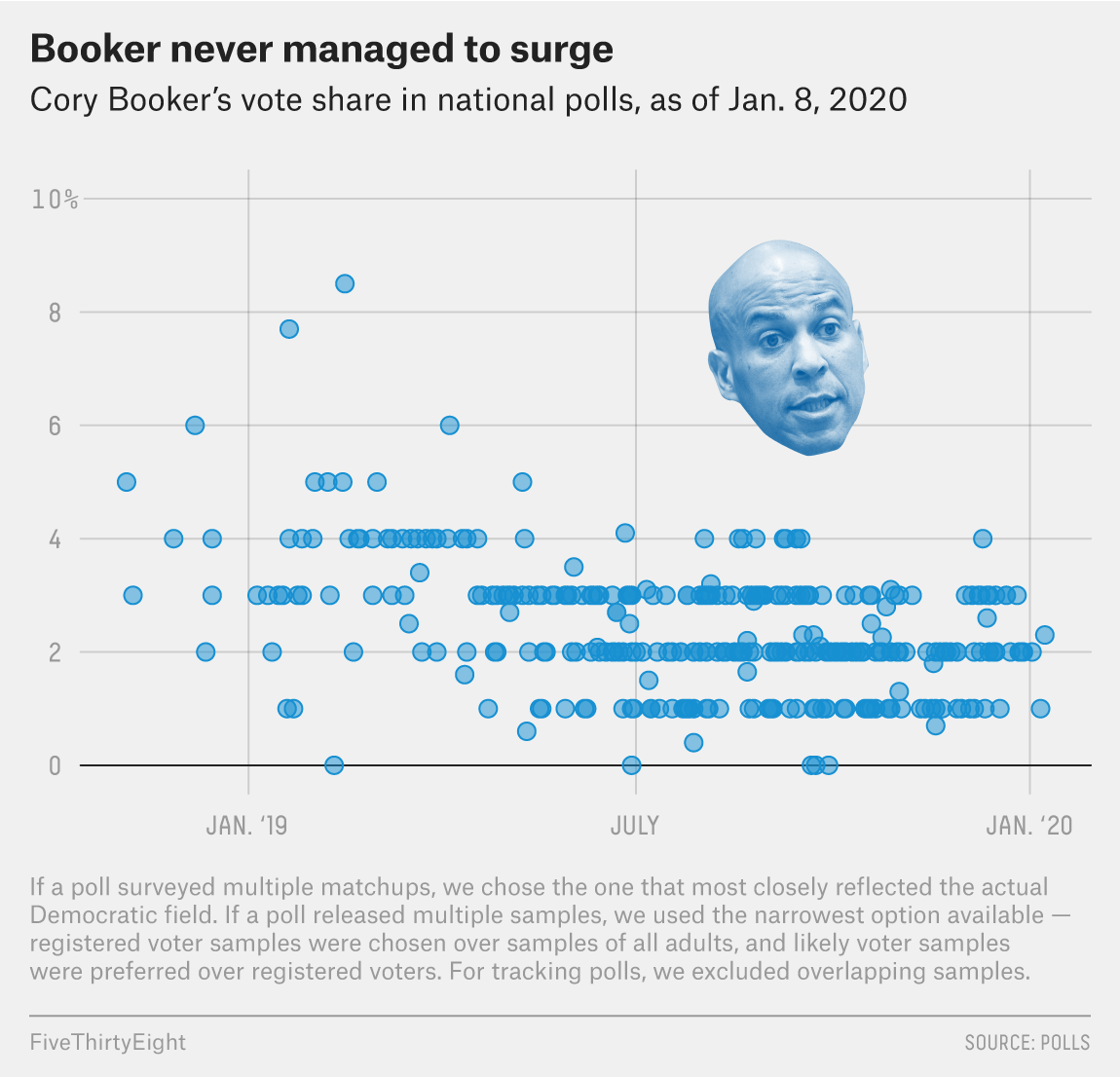 Part of Booker’s problem was that a path to the nomination never really opened up for him. Back when he entered the race on Feb. 1, the most obvious winning coalition for Booker seemed to be a combination of black voters, party loyalists and some younger voters. But Booker never really won over these groups. Instead, former Vice President Joe Biden has maintained his advantage among African American Democrats, which has made it more difficult for Booker (and other candidates) to garner much support from that voting bloc. (Booker, for instance, was only in the single digits among black voters last spring, and in a January survey from The Washington Post and Ipsos, his standing hadn’t improved — he had 4 percent support, while Biden led the field among African American voters with 48 percent support.)

Biden has also generally scored the best on the question of who Democrats believe has the best chance of beating President Trump in the general election, which could help explain his appeal among party loyalists, and why other candidates have struggled to make inroads there. Booker did pick up a flurry of endorsements when he first entered the race, but he struggled to emerge as a consensus candidate, even though there is some evidence that voters liked Booker (or at least weren’t opposed to him). An early January poll from The Economist/YouGov found that only 13 percent of Democratic primary voters would be “disappointed” if Booker became the nominee, the second-smallest percentage behind Warren (11 percent). The problem was that very few voters were considering voting for Booker in the first place. He was the first choice of only 1 percent of respondents in that poll, and the second choice of just 6 percent.

One reason more voters might not have been considering Booker is that Sen. Kamala Harris was also in the race and competing for many of the same voters. Harris had similar appeal to Booker as a relatively young African American candidate who was dynamic on the stump, but, unlike Booker, she actually managed to build some support before dropping out in December. For instance, Harris was able to get out ahead Booker on the endorsement front, earning backers from outside of her home state — which Booker largely failed to do — and from many members of the Congressional Black Caucus. At one point, Harris rivaled only Biden for endorsements. She also had a newsworthy moment in the first debate, after which her poll numbers ballooned — whereas Booker never experienced that sort of burst.

Yet, like Harris, Booker has a political career to protect, which may have played a role in his choice to drop out of the race now. He hadn’t raised that much money, but he still probably would have been able to hang around though Iowa, as he raised a bit more than Sen. Amy Klobuchar in the third quarter of 2019, and she’s still in the race. But with fews signs of progress, Booker may have felt it was time to cut his losses and focus on the more achievable opportunities available to him. For one thing, he’s up for reelection this November, so refocusing his energy on New Jersey and his Senate race isn’t a bad idea. Additionally, he could very well end up a vice presidential option for the eventual Democratic nominee. And dropping out now reduces the risk he’ll butt heads with whomever that person is, which might help preserve his chance of being picked as a running mate.

Sometimes a candidate makes a fair amount of sense on paper but then fails to put it together on the campaign trail. Booker was that kind of candidate, although he is not the first presidential contender to fall into this category — and he probably won’t be the last either.