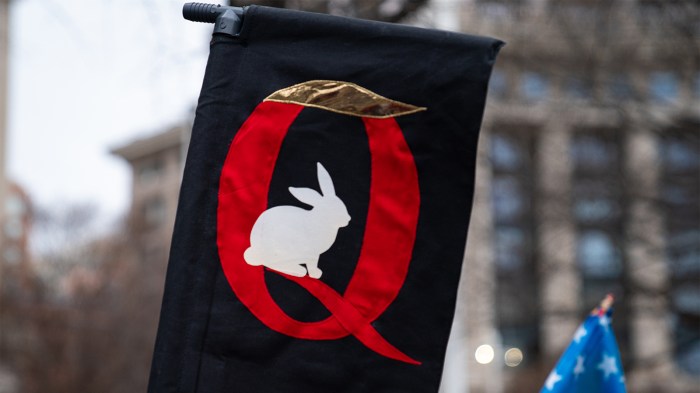 One of the many weird things about reporting on QAnon is that you inevitably start thinking like a conspiracy theorist yourself. Covering a cult as bizarre and perverse as QAnon — its followers believe there is a global cabal of Satan-worshipping child sex traffickers that an anonymous government insider known as “Q” is working to expose — requires a deep well of esoteric knowledge about the movement’s belief system and history, and holding that knowledge in your brain makes you see significance and patterns where there often aren’t any.

You can get a sense for the thrills and pitfalls of that mindset in “Q: Into the Storm,” a new six-part docuseries that just released its final episode on HBO Max. It gets a lot of things right in documenting the growth and impact of QAnon in near real-time over three years. But it also dedicates significant time to trying to unmask the person posting as Q. It’s natural to wonder who is behind Q, and it’s the first question many journalists and researchers have pondered when becoming acquainted with the movement. But who Q is no longer matters — what Q has wrought does.

In the documentary’s prologue, director Cullen Hoback acknowledged that tracking this movement begins to warp your brain. “Whenever I hear ‘plan,’ I think, ‘trust the plan.’ And when I see the number 17, I think ‘Q,’” Hoback said. (Q is the 17th letter of the alphabet, so the number is often interpreted by Q followers to represent the letter.) I myself have fallen victim to his kind of thinking many times. I once paused a completely unrelated livestream because the person started talking about her fondness for a brand of frozen pizza called Lou Malnati’s, which to my addled brain sounded suspiciously like “Illuminati,” the name of a fictitious secret society not unlike the cabal Q followers believe is drinking the blood of children. Add in the fact that pizza is one of QAnon’s oldest symbols for pedophilia, dating all the way back to the pre-Q Pizzagate conspiracy days,<a class="espn-footnote-link" data-footnote-id="1" href="https://fivethirtyeight.com/features/q-isnt-the-most-interesting-thing-about-qanon/#fn-1" data-footnote-content="

Pizzagate was an online conspiracy theory that was a precursor to QAnon and posited that Democratic elites were operating a secret child sex-trafficking ring in the basement of a Washington, D.C., pizzeria.

“>1 and I found myself wondering if the livestreamer was a Q follower (she wasn’t). Q frequently posted that there are “no coincidences,” but dang, there really are a lot of them when you start looking.

The documentary falls prey to this kind of puzzle-solving, pattern-seeking mentality that is so prevalent among Q followers. While earlier episodes explore some of the broader implications of QAnon, eventually the documentary narrows its focus on one goal: exposing who Q is. Throughout the final episodes, Hoback builds a good case for one person in particular, someone who already topped many people’s lists of likely culprits.<a class="espn-footnote-link" data-footnote-id="2" href="https://fivethirtyeight.com/features/q-isnt-the-most-interesting-thing-about-qanon/#fn-2" data-footnote-content="

Hoback suggests it’s Ron Watkins, the former administrator of 8chan/8kun, the image board where Q posted most of his messages, and the son of Jim Watkins, who owns 8chan/8kun.

“>2 As he attempts to solve the mystery, Hoback increasingly exhibits behavior that is almost comically similar to QAnon adherents: following clues, making connections and scrutinizing symbols to uncover hidden meaning. He repeatedly points to images Q has posted that include pens and watches, for example, because his top suspects happen to collect these items. It could be that Hoback was intentionally mirroring the kind of gamified clue-hunting behavior of Q followers as an artistic commentary, but if he was, he doesn’t explicitly point it out in the series. The episodes ramp up into a dramatic climax in which Hoback’s primary suspect nearly outs himself as Q. (Or at least that’s how it’s portrayed.)

But even if Hoback had managed to elicit a full confession, it likely wouldn’t have much impact on QAnon as a movement. Q followers would do what they always do when confronted with conflicting evidence to their belief system: they would either dismiss it or find a way to fold the information into their worldview. Even if someone admitted that Q’s posts were a complete fabrication, it would not be enough to penetrate the hard outer shell of belief for many followers. Q, after all, has gone underground. He (or she or they) hasn’t posted since Dec. 8, 2020, the longest stretch of silence since Q first began posting in 2017.

It’s entirely possible that Q may never post again, yet the movement is as strong as ever. Q didn’t need to post for some followers to take part in the deadly attack on the U.S. Capitol building on Jan. 6. QAnon has long since taken on a life of its own, and with nearly 5,000 extant Q posts to study and dozens of Q influencers pushing new theories and recasting the news of the day within the Q framework, it has all the ingredients needed to survive long after Q disappears.

Beyond its limited potential to sway true believers, focusing too much on Q’s identity means skirting the harder questions. It’s fun to scrutinize Q “drops” for revelatory clues. It’s less fun, but far more important, to piece together why QAnon was able to grow as rapidly and widely as it did, or what that says about this moment in American politics, or how we can move past it. QAnon is much more than its maker, and it’s more than just some crazy shit happening on the internet. Treating it as an irresistible puzzle to be solved undermines the real-world impact this movement has.

I can’t say I really blame Hoback. Q’s identity is a question that many of us have spent time and energy trying to answer over the years. When you’re peering into a rabbit hole, it’s all too easy to only keep your eye on the rabbit.