So how does Biden’s lead stack up to those in previous cycles? We compared his standing at this point to previous presidential elections by applying our polling average methodology to polls from past cycles. And as you can see in the chart below, both Biden’s average support and margin over Trump are historically large — the largest of any contender since Bill Clinton in 1996. 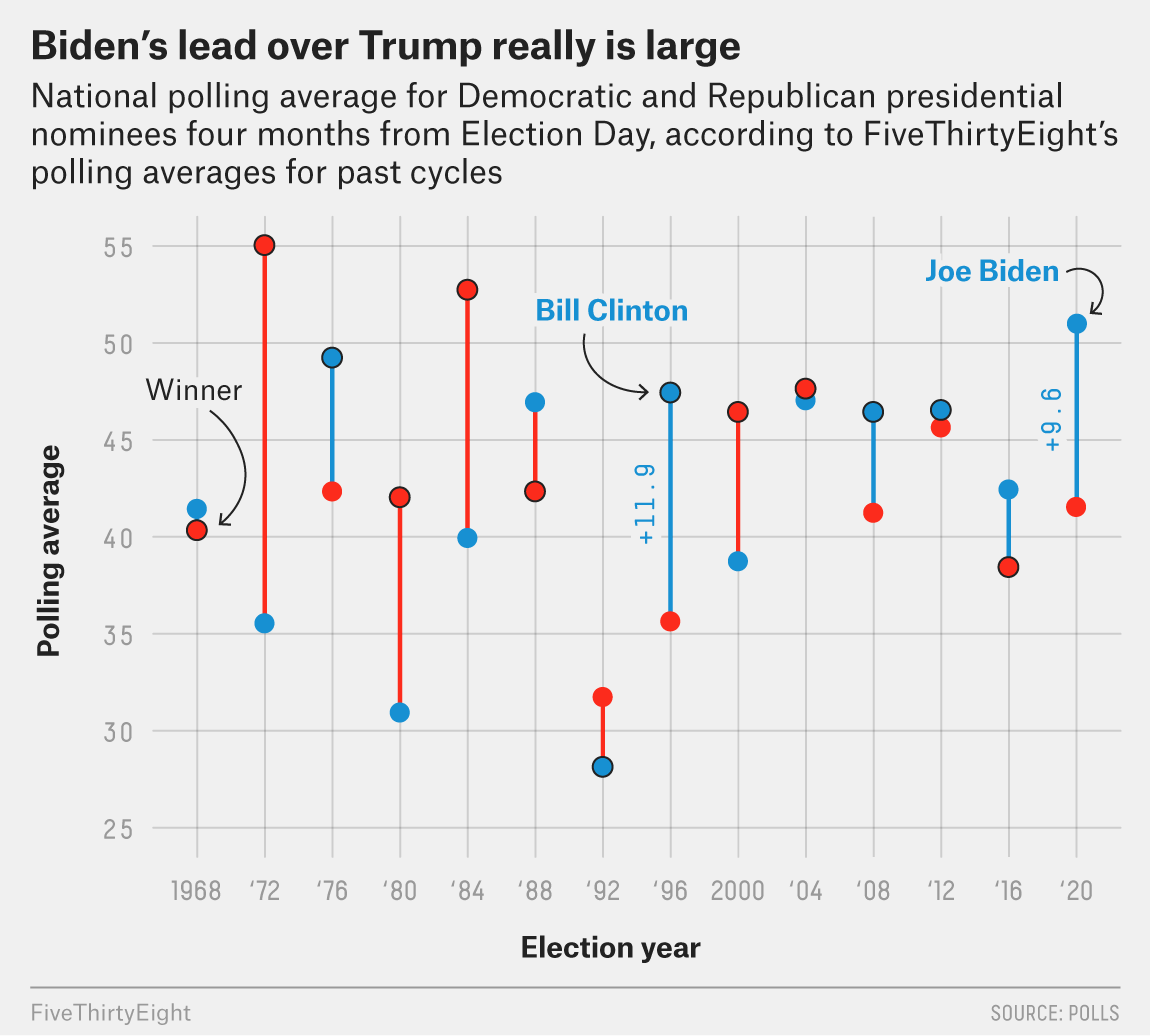 Of course, there are still four months to go until Election Day, but the fact that Biden has such a sizable lead — already bigger than Hillary Clinton’s largest lead over Trump, which peaked at 7.5 points in 2016 — is notable. Heck, even Barack Obama never led by more than 8 points in our 2008 national average, and that wound up being a blowout.

It’s not just Biden’s margin that stands out, either; he’s also only one of three candidates to crack the 50 percent mark at this point in the cycle. (The other two were Richard Nixon in 1972 and Ronald Reagan in 1984, both of whom were incumbents who went on to win landslide victories by 23 and 18 points, respectively.) It’s unlikely that Biden wins by that sort of margin, given our increasingly polarized politics, but it is a sign that there are fewer undecided or third-party voters for Trump to pick up to help improve his position. It also doesn’t bode well for Trump that he is in the worst position of any incumbent since Jimmy Carter in 1980.

But before you declare Biden the winner, remember his lead is not insurmountable. Polls closer to November could very well show a race that is tightening. At this point in the 1988 cycle, Michael Dukakis led nationally by almost 5 points, and in 2000, George W. Bush was up by nearly 8 points. But Dukakis ended up losing by nearly 8 points in November while Bush narrowly lost the popular vote. (He still won the Electoral College, thanks to Florida.)

[Related: Why Biden’s Polling Lead Is Different From Clinton’s In 2016]

So Trump still has plenty of time to recover enough ground to win in the Electoral College even if he loses the national popular vote — after all, he did it in 2016. That said, if Biden’s current national lead holds steady, it would almost certainly neutralize Trump’s potential edge in the Electoral College. But as Dukakis and Bush show us, a lot can change between now and November.

Do you buy that Trump can ride a midwest path to victory in 2020?